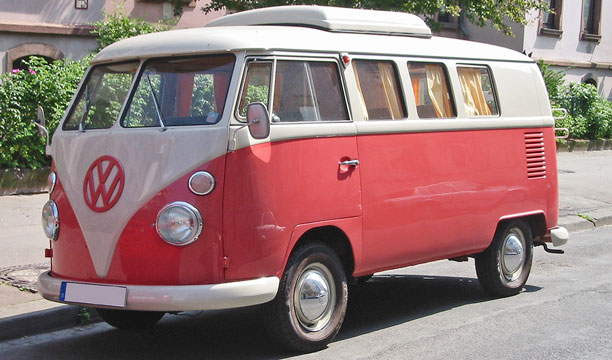 On March 8, 1950, the iconic Volkswagen Bus began production. Officially called the Volkswagen Type 2 — and the Microbus, Splitscreen, or Splittie by modern fans of the vehicle — it remained on the market in the US and in Europe until 1967.

The Type 2 was, as the name implies, the second car produced by Volkswagen, coming after production of the Volkswagen Type 1, which was the much more boring name for the Beetle. At first, the Bus was powered by the same engine as the Beetle — a 1100 Volkswagen, an air-cooled flat-four-cylinder “boxer” engine mounted in the rear. The engine was upgraded in 1953 to the bigger 1200.

Credit for the concept of the Type 2 is generally given to Dutch businessman Ben Pon. Pon had visited Germany intending to buy Type 1s. He instead had a realization that there could be a market for vans, which could easily be produced using the Type 1’s basic architecture. He sketched out a design for the Bus in 1947 and was able to get VW on board to start production by 1950.

After it had been on the market for some time, the Bus became especially popular in the United States during the counterculture movement of the 1960s, leading to another nickname for the T2: The “Hippie Van.” In present popular culture, in fact, the VW Bus is still often used to designate characters as of the Hippie Type (think Disney’s “Cars”).

Today, VW Buses are rare, especially in the United States, and are relished by collectors. Despite the lack of real world examples of the Type 2, it continues to live on in replications, concepts and in pop culture.